Sierra Leone is about the size of the Midwest State of Nigeria. It is located between Liberia and Ghana. It gained its independence from Great Britain in 1961. The capital of the country is Freetown. It boasts the finest harbour along the West Coast of Africa and is a thriving and progressive port city. The original colony of Sierra Leone is a strip of Land which extends inland about 20 miles and has a population of about 125,000. Most of the population are descendants of the first freed slaves and are known as Creoles. This part of the country is modern and well-developed. There are schools, hospitals, and many church buildings. In the city of Freetown alone there are nearly 100 churches. The people of the Interior have had little opportunity. Many suffer from lack of life necessities of food, adequate clothing, and shelter.

The population is about two and half million. Bumbuna, located 172 miles inland from Freetown, is the site of our Baptist Foreign Mission field Sierra Leone. Generally, the native language in Sierra Leone is CREOLE

About 80% of the people claim to be Muslims; 15% claim to be Pagans and the remaining 5% claim the Christian religion. Even though many claim to be muslims their lives are controlled by heathen practices. Most Muslims faithful take part. in offering sacrifices to the different spirits who are believed to be responsible for everything that goes on. Every tribe in Sierra Leone except the Creoles has its own beliefs, superstitions, traditions and secret societies. There are ceremonies and rites connected with circumcision in nearly all the tribes. Members hearts and minds are enslaved with the beliefs of these societies.

On a January day in 1961, the first Foreign Missionaries of the Nigerian Baptist Convention set sail at the Apapa Wharf in Lagos for Freetown, Sierra Leone. They were Rev. F. P. Boyo and Rev. I. O. Badejogbin.

In 1963, the Home and Foreign Mission Board gave approval to the Missionaries to negotiate for the opening of a school in Bumbuna, in September, 1964. The school opened on schedule as a private institution. The vestry of the church served as the classroom for 38 pupils. Mr. B. Y. Koroma, one of the first Indignous Leaders in the work, served as the first teacher. On February 27, 1966, Mr. and Mrs. A. J. Ogbeide were appointed by the Board as Missionary teachers to Bumbuna. This couple arrived in Sierra Leone in March 1966. God blessed their work and the school increased numerically and spiritually.

In 1969 the work was extended to Magburuka, the district headquarters of Tongolili.

Rev. E. A. Udoh arrived in Sierra Leone in 1972 as a Missionary. He established Victory Baptist Church and Baptist primary School, Magburuka. In 1972 Rev. F. P. Boyo was withdrawn from the field and was replaced by Rev. Odebunmi who continued the work started. Odebunmi then established a Bible school which did not survive much. Though the school had a very short life span; it was the school that produced the General Secretary of Emmanuel Baptist Conference Sierra Leone Rev. A. A. Bangura. Rev. and Mrs. E. A. Udoh were then transferred to Makeni in 1976 (Makeni is the provincial headquarters of the North). During their stay at Makeni, he established Faith Baptist Church and Baptist Model Primary School.

In 1976, the Odebunmis returned to Nigeria while the Udohs returned in 1978. They were replaced with Rev. and Mrs. D. Ozurumba based in Magburuka. The Ozurumbas continued with the work started by the Udohs at Magburuka. They also planted a Church at Rowala. In 1981 both the Ozurumbas and the Ogbeides returned to Nigerian. Rev. Adegoke, Ololade and Akinlawon were later sent as interim Missionries. During the interim period, the work was extended to Freetown, Kabala and Lungi areas of Sierra Leone. In 1984, Rev. and Mrs. I. D. Ayanrinola arrived in Sierra Leone as Missionaries based at Magburuka. During their stay, the existing work was strengthened and extended to the immediate communities such as: Bumbuna, Magburuka, Makeni and other villages around. They also established a school of evangelism at Magburuka which produced men of God like Rev. Daniel T. Bangura, who later joined the Bible College at Freetown because the Evangelism school went off the scene after the founder left. The country faced severe war of 10 years that devastated the land. Some of our Pastors and brethren were killed and Pastorium and Church buildings razed down!

The nationals took over the leadership from Evangelist M. B. Ojo and Revd. & Mrs. Awowo who came back home during the war.

In 2009, a five man team went for fact finding mission trip to see how the work of 47 years will not go down the drain.

In April, 2008, the Global Missions Board (NBC) sent Rev. and Mrs. Ojo, who were detailed to plant and grow English speaking Baptist Churches in Freetown, Sierra Leone in preparation for eventual granting of autonomy to her premier International Mission field come 2011. The Church has been planted and we have 27 regular members.

How can you be involved?

– Pray for the staff on the Field/Leadership.

– Give money for the realization of the above ministry focus. 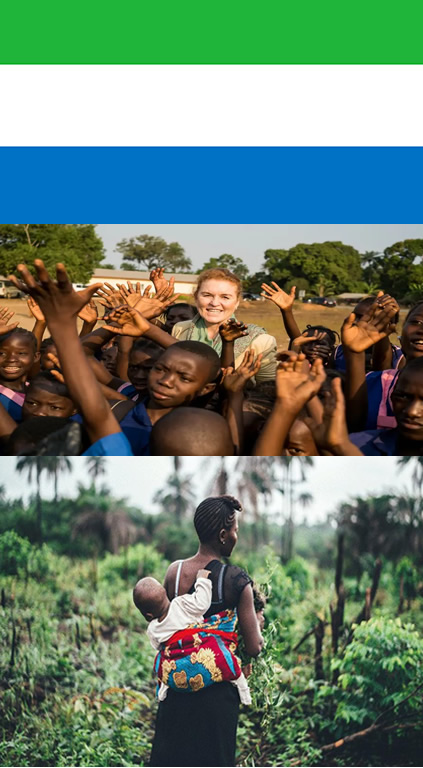